Stephanie Rowe Interview, Author of Kiss at Your Own Risk
My Book Addiction and More; January 27, 2011

MBA:    Who was a favorite character/s you have written about and why?

SR: Honestly, all my characters are my favorite at the time I am writing them. I think that’s necessary as an author, because if you don’t believe in your characters and if you don’t love them until your heart bleeds, then it would be impossible to show the reader why they should love them, too.

MBA:   What is the quirkiest or craziest thing you have ever done?
SR: I think it was my first paranormal book I write, Date Me Baby, One More Time. When I wrote that, I decided to go totally over the top, outside the bounds of what was selling and just go crazy. It ended selling at auction, and it was a great moment to know that sometimes going outside the lines can work magic. It opened doors for me, allowing me to move into my new paranormal series which takes that same edge and makes it an even more powerful story.

MBA: How do you see the future of your series?

MBA: How do you know who will be the villian/and does your main characters start out from the beginning or later?

SR: In Kiss at Your Own Risk, the villain and the main characters were very vivid long before I started writing. I was compelled to write this story, because their stories and their characters were so magnificent that I knew they had to be told.

MBA: What is the accomplishment you are the most proud of and why?

SR: Oh, there are so many! I have had a very up and down career with a lot of challenges. But my biggest triumph I think is the book I have currently on the shelves, Kiss at Your Own Risk. About two and a half years ago, my life imploded on all levels. It really brought me to my knees, and it took tremendous effort for me to rebuild my sense of self and my life. This book is the first book I sold after I began to recover, and I had to dig very deep many times to write it. But when I finished, I knew it was the best book I’d ever written, and to me, that is the greatest triumph of all.

MBA: What is the hardest thing about writing with the underworld/paranormal theme and how did you overcome it?

SR: I think one of the more challenging things about writing a paranormal is creating the world. There is a fine balance between putting in enough detail for the reader to become engaged in the world, but not enough to confuse them! 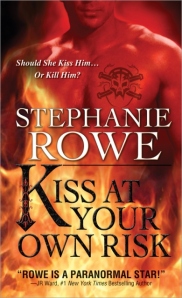 He needed a killer woman…

Blaine Underhill is one lucky man after having recently escaped a century and a half of imprisonment at the hands of an evil witch. Now he’s determined to save his still-enslaved friend, but in order to do so, he’ll need the help of one of the world’s most lethal women.

She was drop dead gorgeous, literally…

Trinity Harpswell is sick and tired of being a Black Widow. Having managed to go three years without accidentally killing anyone she loves, she’s one short week away from freeing herself from this killer curse forever.

When Blaine tracks her down and convinces her to help him, little does Trinity know that the next seven days are going to be murder! 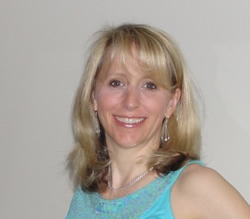 Four-time RITA Award nominee and Golden Heart Award winner Stephanie Rowe is a nationally bestselling author, and has more than twenty-five contracted titles with major publishers such as HarperCollins, Dorchester and Harlequin. Stephanie has charmed reviewers with her unique blend of humor and otherworldly magic. She lives outside Boston, MA, where she is working on the next two books in the Soulfire Series: Touch if You Dare (July 2011) and Hold Me If You Can (September 2011).  For more information, please visit http://www.stephanierowe.com/..

*Thanks to the great Danielle at Sourcebooks I’m thrilled to offer readers a chance to win 1 of 2 copies of KISS AT YOUR OWN RISK by Stephanie Rowe. Giveaway is open to US and Canadian Residents only. No PO Boxes please. In order to be entered you must comment here with more than “enter me please”, and you must come back to see if you win. Giveaway will run from today Jan. 27th until Feb. 3rd.  Books will be coming from the publisher. We are not responsible for lost, stolen, or late books. Good Luck!*

10 thoughts on “An interview with Stephanie Rowe and a giveaway”

This site uses Akismet to reduce spam. Learn how your comment data is processed.

If you'd like to request a review or be a guest of our blog please fill out the Review Request form.
Join 3,079 other subscribers